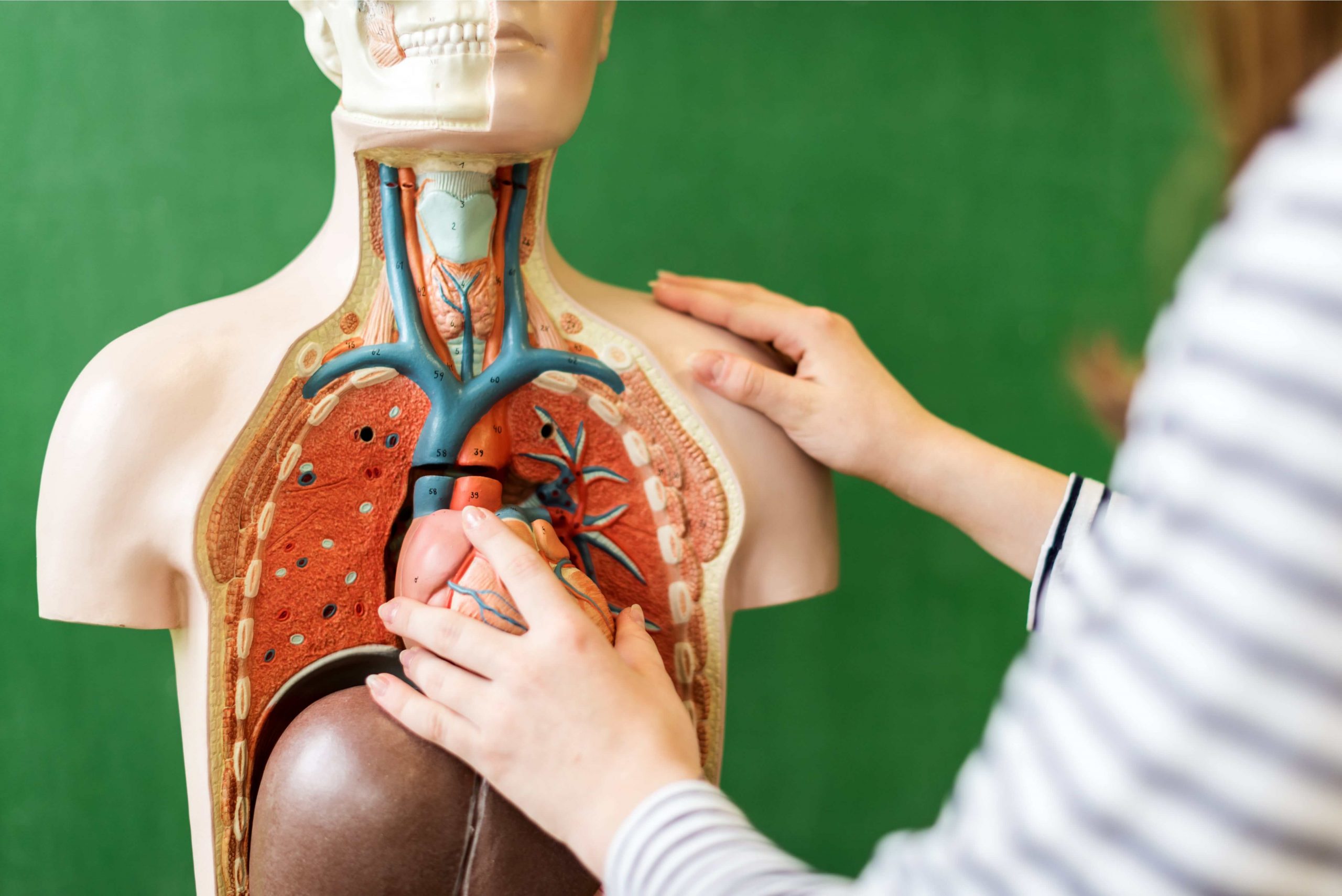 Why Does Erectile Dysfunction Happen? – How an Erection Works

By James O'CaelliaghSeptember 2021No Comments

It might have been a while since your last biology lesson, but there’s always new opportunities to learn about your body, and why things might occasionally go wrong.

At the base of the issue however, without emotions or societal perceptions, it’s pretty simple. The penis isn’t becoming erect when it should.

In this article, we’ll talk about the anatomy of the penis and what goes wrong when erectile dysfunction occurs.

The Structure of the Penis

The penis is made up of various parts:

This is the head of the penis. The glans may or may not be covered by foreskin, depending on whether or not you are circumcised. In uncircumcised men, the glans has a mucosal surface.

Carries the majority of oxygenated blood to the penis.

Carries the majority of blood out or the penis.

These are two tubes, containing arteries and capillaries, which in a flacid penis, only carry small amounts of blood, and are contracted so that blood cannot enter. When larger volumes of blood are pumped into the penis during erection, the blood vessels fill making the corpus cavernosum stiff and erect.

This is a smaller time which runs along the bottom side of the penis. It surrounds and protects the urethra. During an erection, the corpus spongiosum also fills with blood and compresses the urethra.

These are a group of muscles in the pelvis, some of which contract to keep pressure on the penis while erect and prevent blood from flowing back out. 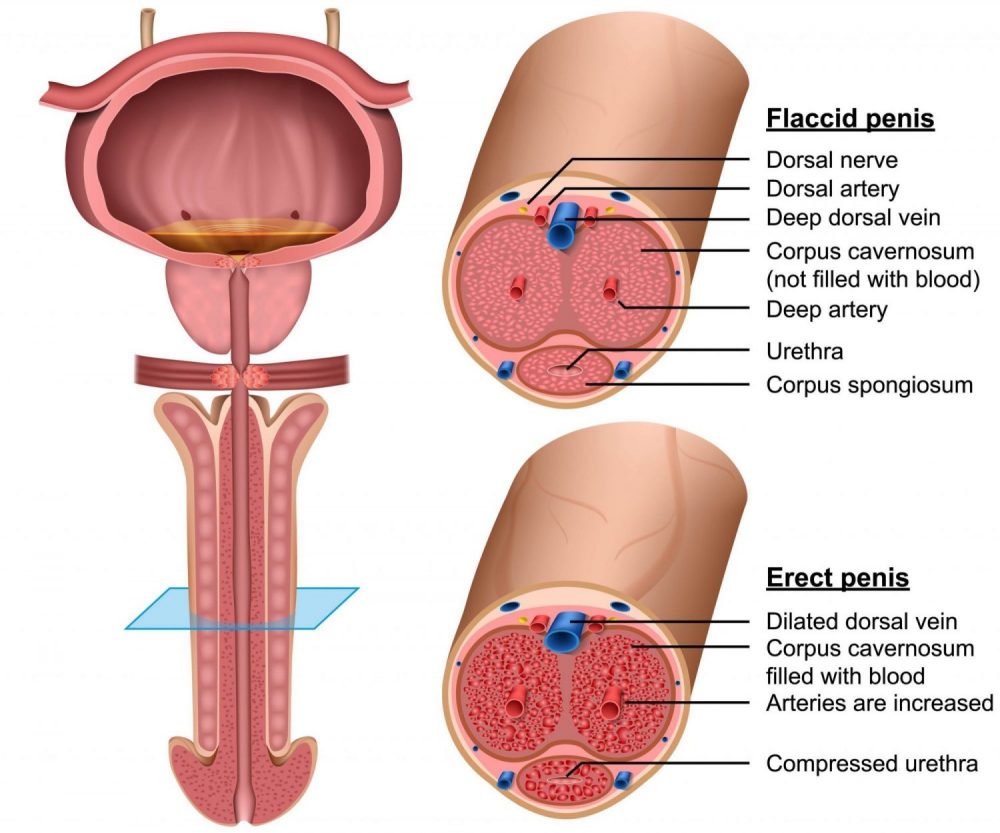 How does an erection work?

When you become aroused, nitric oxide (NO) is released into the bloodstream. NO is a vasodilator, meaning that it causes blood vessels to widen. It also, along with a chemical called cGMP, causes the smooth muscles of the corpus cavernosum and spongiosum to relax, allowing blood to flow into the penis.

As the corpus cavernosum becomes enlarged and erect, it compresses veins which would typically transport blood out of the penis, meaning blood is trapped in the penis. If the blood becomes trapped for long periods of time (longer than four hours) this could cause a serious condition called a priapism, in which the penis cannot get enough oxygenated blood and tissue begins to die. Usually blood will leave the penis and be replaced with oxygenated blood far before that.

When the erection is no longer needed, either when ejaculation has occurred or arousal has diminished, an enzyme called PDE5 will be released, which breaks down cGMP and returns the corpus cavernosum to their original state, pushing blood out and making the penis flaccid again. Erectile dysfunction medications like Viagra are PDE5 inhibitors, so they inhibit this process from happening, making achieving and maintaining an erection for longer easier.

Why do some men get erectile dysfunction?

Erectile dysfunction happens when any one step of this process is interrupted, so it can have a few different root causes.

Usually erectile dysfunction is a symptom of a larger physiological issue, most commonly either some type of cardiovascular disease or diabetes.  Because blood flow into the penis requires healthy circulation, cardiovascular issues such as atherosclerosis, heart disease or high blood pressure can harm your ability to achieve an erection.

Erectile dysfunction’s comorbidity with these diseases is also why it tends to occur in older men. With men under the age of 40, symptoms of ED tend to be down to psychological reasons like performance anxiety. Anxiety can distract you, making it more difficult to focus on arousal.

Although less common, hormone issues can also come into play, particularly testosterone. It is unclear what precise role testosterone plays in the regulation of erections, however low testosterone can reduce your sex drive, making arousal more difficult. Low testosterone can also be a sign of cardiovascular disease, diabetes, obesity, and a few other conditions which influence erections.

If you’re suffering from ED, your very first step should be to see a GP, as if you do have an underlying condition of which ED is a symptom, ignoring it and covering up symptoms with Viagra could be a major risk to your health.

How is Shockwave Therapy a Solution?

Shockwave therapy involves passing short acoustic waves through the penis. It firstly breaks down any fatty plaque deposits lining or blocking the blood vessels within the penis and also promotes atherogenesis, the formation and growth of new blood vessels which can increase the volume of blood flow to the penis during an erection.

Shockwave therapy improves the symptoms of ED in over 75% of men, and if paired with lifestyle changes like a healthier diet, more exercise, or medication to treat the underlying health issue, the effects can be permanent.